Hello! Growing 3 lavender pods in my Smartgarden 3 for the first time, and I’m having an extremely bad mold infestation. I’m actually starting to get really worried for my own respiratory health. The mold growth is so thick that if I even do so little as to lift the pods out and click them back into place, little particles of the mold would start to disperse into the air like a cloud of smoke. This is how bad it has become.

Also there is a 3rd pod which isn’t sprouting as fast as the other 2 pods. And this pod has a really weird pink colored mould growing on it that isn’t present on the other 2 pods. Another thing I noticed that’s really weird about this very pod is that when I lifted it out to inspect the wick, there is a trial of slime that connects the wick the reservoir below (I would like to upload the photo of this slime, but as a new user I’m only restricted to one photo per post, and I already used this allowance for the main photo of the overall mold situation). There wasn’t such a slime present in the other 2 pods. Wondering if somehow this is related to the problem of it sprouting slower.

Now I’ve started noticing that my nasal passage is becoming more congested in general and I’m afraid it could be coming from the mould that’s overgrowing.

I really love my smartgarden. My apartment is really small, and I’m growing this garden inside my apartment but near to the front door that is the entrance to my apartment. So if there is any air circulation that arises from my opening and closing the front door, I think the spores from the mould can easily be spread throughout my apartment.

In fact, back when I was lifting out my pods to inspect their bottoms, I had to unclick and click the pods in place. This tiny disturbance alone was enough to disperse green clouds of spores visible with my own naked eye, that settled down on the surrounding ground like little sprinkles of fine dust.

I really don’t know how to deal with this issue. How do I even scrape of this mold to begin with? It looks too much to deal with, I don’t want to disturb the mold and disperse their spores all over my home!

Any help will be greatly appreciated! Thank you in advance! 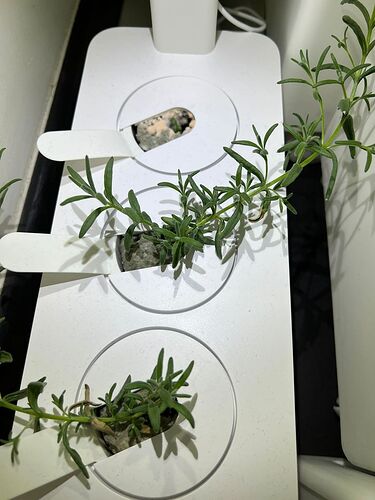 You can use cinnamon powder to prevent mold from growing

@Chris65687
If I put the cinnamon powder now, will it stop the mold? Is it too late already?

If cinnamon powder can inhibit mold from growing, then I will apply it to new pods. I will throw these old pods away and plant new pods, with cinnamon powder applied right from the start. But will it affect the germination and growth of the plants?

The pod that hasn’t sprouted can be discarded, but others could benefit if you sprinkle a little bit of cinnamon on the moldy spots. If you are up for it you can just cut the top part (0.5 cm/0.3 inches) of the soil with scissors/knife before adding cinnamon but carefully so you wouldn’t hurt the plants.

We also have a video on removing mold: Growing MOLD? Find Out How To Remove It Quick! - YouTube.

Another thing you can do is to add a fan somewhere near the garden and cover the soil with foil or something that doesn’t let light through. Browning leaves on the lavender probably indicate that the garden might be overwatered, or softened water is being used. You can read more about watering here: https://support.clickandgrow.com/hc/en-us/articles/4407403925138-All-about-watering.

Regarding sprinkling cinnamon - do you mean to say that even if mold has already grown, cinnamon can still be sprinkled on the mold to mitigate it? But will it kill off the mold? If it can kill it off, then I would prefer to just sprinkle the cinnamon only and not bother with cutting off the top part of the soil. I’m so afraid of doing anything that might agitate the pods which would disperse the spores from the mold.

I like the idea about covering the soil with foil! So the mold thrives in the light, without light, the mould cannot grow?

About the fan - is it good for the plants? How strong should the fan be? Would it be an issue that a fan could dry out the plants and soil?

Thanks for pointing out the browning leaves and how its possible related to the watering. I noticed that too, was quite puzzled, but the mold issue starting taking centerstage. I’ll look into watering as well.

Many thanks for your advice!

It would be best to remove some of the mold and then add the cinnamon, as shown in the video here: Growing MOLD? Find Out How To Remove It Quick! - YouTube.

The lids and foil optimise water consumption by helping to reduce water evaporation from the soil. They also minimise the amount of space between the lid and soil so mold can’t thrive. By covering the majority of the soil’s surface from the light, they make it more difficult for algae to grow.

The fan is meant to promote the airflow around the plants and no need to worry about drying them out. It could be a small desk fan, for example.

I note that the mold should still be removed first. How about if I were to grow fresh new pods, could I sprinkle cinnamon right from the beginning to inhibit mold? To add the cinnamon like immediately after clicking the fresh pods in place.

Thank you for clarifying about the other points. I will try to employ these measures once I have sorted out the mold on these pods!

I added cinnamon in my first round of pods after the plants became visible.
On my second round of pods I added it right after they started to be soaked with water. And the salad i grew was absolutely fine.
I also replaced some pods now (after harvesting the whole salat plants from a pod) and I haven’t added any cinnamon yet to the new pods…
So yeah you can add the cinnamon whenever you want, but also keep in mind that no amount of cinnamon will help if it is too humid or too much water in the tank.

Hi @AssetBurned thanks for sharing your experience with adding cinnamon early! Glad to know, seems like it doesn’t affect the pods from sprouting, and the sprouts will be fine. I shall add cinnamon right from the start when I install any new pods. I agree with humidity and overwatering, shall keep those parameters in check as well. Always a challenge for us here in the Tropics!

Yeah it really depends. I just replaced some salad last week and still didn’t added anything. At the moment it is so warm here that the windows are open and a lot of ventilation takes place. So I guess I will just leave it for now. But when I see the first sign of anything I will use the cinnamon again.

What surprises me is that I don’t have any mold problems after putting plants in big flowerpots.