First, I have to admit I’m a very experienced plants killer. I thought buying C&G I could manage to finally grow a small garden by actually NOT doing anything.

Even though, the sprouting went pretty well, I started with two lettuces, 3 tomatoes plants, 2 pepper and 2 basil.

The lettuces were disappointing, and I harvested like 8 small leaves and nothing more. I thought, I’ll have more chance with the other plants.

But now, after having the pepper looking the best for some time (yeah tomatoes were always looking down, like growing on steroid, against their will), all plants seem to be dying. I have actually no idea what is happening. I do take care of not overwatering them, and I’m not doing anything except letting them thrive. The temperature of the room is 21-22°C.

Here are some attached pictures, if any “green hand” has advises to help me: 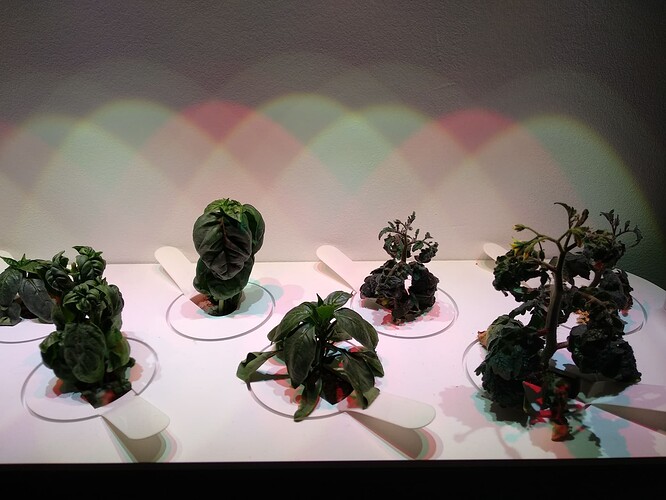 Happy to have you.
I see that the plants are quite small of their size. Can you tell me how long these have been growing? Though the tomato variety is one of the smaller ones C&G has, these plants don’t look their best. Do you have any pictures of the lettuce by chance?

No sign of pest damage. So it is either to do with growing conditions or seed quality. Can you confirm that the lights are with one extension and the light cycle is default 16 h on and 8 h off?

Basil have low yield and quite small leaves, it can be caused by interaction of low germination with colder temperatures and low humidity. Also tomato plants love warmer temperatures and can suffer from cold draft. Temperatures seem fine and there shouln’t be any problems but if there is a way to keep them in a warmer place or maybe near a sunny windowsill then its worth a try. How’s the humidity near the device or in the room?

I’d contact the support regarding the basils, they don’t seem to have enough germinated plants and looking small because of that.

Yes, I agree, the plants look pretty small. The tomatoes are 53/126 days old, but they already started flowering … It doesn’t feel like they are gonna grow more, and the one in front is the biggest one I have. The two other ones are ridiculously small. I don’t know which size they are supposed to have reached at this point, but knowing a bit about plants, flowering often means stop of growth …

Conditions of growths are 21-22°C, 50-60% humidity and 16h/8h light cycle. I don’t have any available windows where to put them as all of them have a heater underneath, which is literally signing a death warrant for plants (my other plants suffers from that, and I’m fighting against giving them light, and not drying them. Few of them survived winter in my place and I basically change them every year …

The only thing I have noticed (and which is visible on the picture) is that I have a lot of mold, but I read that it was harmless and just ignored it. My apartment is quite humid, so I’m not surprised about seeing mold in the pods, where the conditions are perfect for mold. Could it be that? And what can I do against it? Hard to get rid of the mold without killing the plants themselves, no?

For the water, I use the water from my dehumidifiers (so it’s probably lacking minerals and other nutrient), but at least it’s not as hard as it is from the tap, and there is no chlorine. It’s like rain water.

The most curious thing is the pepper. Because all other plants grew slowly and looking not super happy like on the picture. Peppers did look super happy at first, but from one point it started to die. Now almost all the root leaves are dead.

For the lettuce, here is a picture attached, it’s a bit before I harvested, but that was pretty much it: 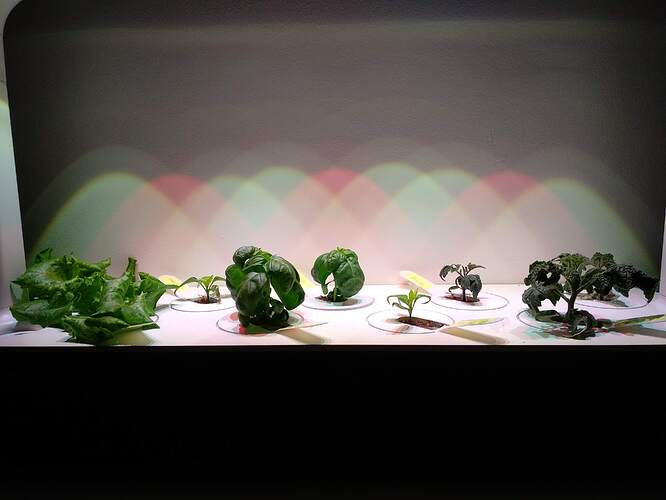 Thank you for the clarifications.

Besides the tomatoes being small I believe they will yield, but they will need some support if they start bearing fruit. As the tomatoes from C&G are dwarf cultivars, they will stop growing after flowering yes, maybe they’ll get a little bit bigger than this. One of the reasons why plants stay small is that they have more than enough fertilizer and take up a lot of nutrients while the lighting conditions are impeccable. And it results in putting in a low effort to grow their leaves and leaves look very healthy green too. I noticed that both chilli plants have degrading cotyledons (first leaves) that are either curved inward or burned. Thinking maybe some fertiliser or nutrients were added into the tank, no?

Mold is quite common and harmless on pods because the pods are constantly retaining water. If it becomes excessive, try to remove it by scraping it off or covering the soil part leaving the stems out.

The next thought is checking the dehumidifier water suitability for this. Hard tap water residues are bothersome to clean, so it seems to be a great alternative for humid rooms. I tried to find some information about dehumidified water and overall it is good for the plants but it is not recommended to use it for edible plants. As it can contain bacteria, fungi and other microorganisms that can build up in the pipes or condensate bucket. Maybe try switching to tap water and let’s see if the situation is improving.

The lettuce looks great in the last pic, it is almost the size of an average 2 or 3-week-old lettuce. I recon you used the app for harvesting tips so taking it down around 35-40 days is suggestible. I’d maybe even keep it a little longer as it looks very small. Did it have any problems other than not growing bigger?